Once they have established themselves under a toenail or fingernail dermatophytes (fungi) feed on keratin which is the substance that makes up the structure of the nail. Dermatophytes can ultimately lead to a fungal nail infection. Left un-treated the nail’s condition will worsen and it will gradually change appearance: first white patches appear then the nail turns yellow, starts to thicken, and eventually crumbles. In some cases the nail may separate partially or completely from the nail bed which can be very painful. The infection may even result in permanent loss of the nail.

A hard nail surface is one of the traits of fungal nail infection. Keratin is the most important building block of the nail which is difficult to penetrate for most antifungal products. In most cases dermatophytes find themselves underneath the nail which makes it more difficult for effective treatment. Excilor® penetrates deep into the infected nail and lowers the pH value in and underneath the nail through a process called addification. Excilor® modifies the nail's micro-environment making it hostile to fungal growth.

The effect of Excilor® solution and brush are based on the unique TransActive™ Technology making sure the active substance penetrates the nail immediately therefore creating a hostile environment for the fungal nail infection. This prevents further growth of the fungus and deterioration of the fungal nail infection. It also improves the cosmetic aspect of the nail as an infected nail can look un-hygienic.

The effects of Excilor® are visible as the infected part of the nail grows out. It is important to start the treatment as soon as the first symptoms appear: the smaller the infected area the shorter the period of treatment – and the faster the nail will regain its normal, healthy appearance.

The nail is treated from the inside. It can take several months before the infected nail looks completely healthy again. A toenail only grows +/- 1,5 mm a month. Excilor® lowers the pH value of the nail making it hostile to fungal growth. However the infected nail must have time to grow out. 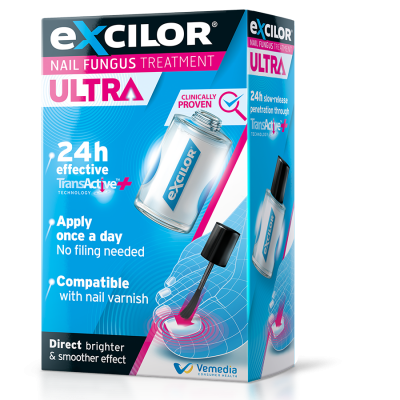 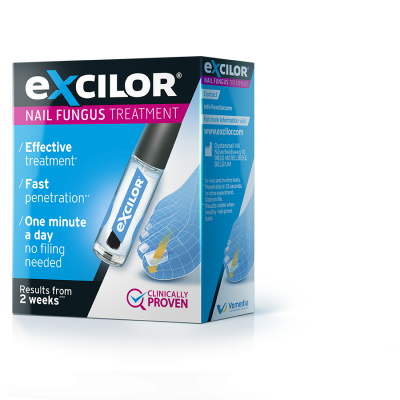 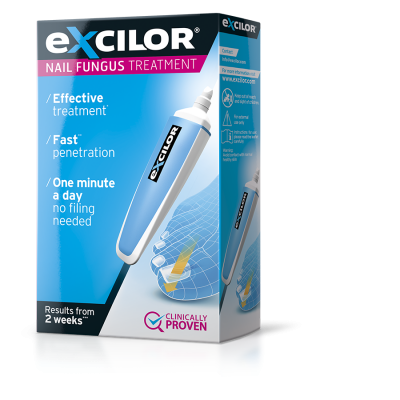